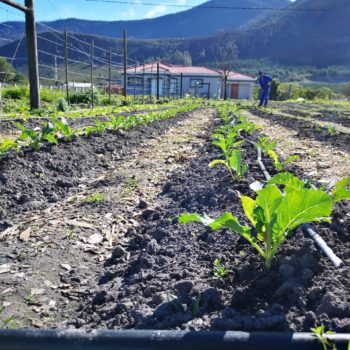 In a first for Africa, the Inclusive Carbon Standard (inclusivecarbon.org) cuts the cost of registering carbon offset projects, allowing even small community initiatives to be rewarded for their efforts to fight climate change.

“This standard is going to help South Africa, Africa and potentially the world to meet their global climate targets,” says FTFA executive director Chris Wild. “There are currently people in this space doing good work, and we want them to be rewarded for the work that they do.”

Humans are pumping unprecedented amounts of carbon dioxide and other greenhouse gases into the atmosphere. This excess carbon is altering the planet’s climate, pushing up global temperatures and increasing the frequency and intensity of extreme weather events such as droughts. In 2015, countries from around the world, including South Africa, committed to significantly reducing their carbon emissions to curb catastrophic climate change.

But South Africa has fallen behind in its plans to reduce its emissions. An accessible carbon registry, such as the Inclusive Carbon Standard, will encourage more businesses and individuals to earn carbon credits, without the cost and administrative burden of existing standards.

South Africa’s Carbon Tax Act, signed into law in 2019, puts a monetary value on the carbon that companies emit, forcing them to pay for their carbon dioxide emissions. National Treasury allows companies to buy carbon credits, produced by initiatives that suck carbon out of the atmosphere and store it, to offset their carbon emissions. But to date, only large companies or projects have been able to afford the auditing required to register carbon offset projects.

“We have developed methodologies and incorporated the latest technologies, such as the Internet of Things, to create a standard that all communities in South Africa can access,” says Wild. “We want to make the audit costs of doing good work negligible, and the only way you can do this is with technology.”

The Inclusive Carbon Standard, developed in collaboration with environmental consultancy Promethium Carbon, allows projects to join the registry via an online platform and quantify their contributions via cutting-edge technology, such as satellite imagery and drones.  The standard will be able to evaluate land-based projects, renewable energy projects, and energy efficiency projects, says Promethium Carbon’s Robbie Louw.

Some carbon standards, such as VCS, explicitly exclude renewable energy projects, even though this shift would contribute towards a significant carbon reduction in coal-dependent South Africa. Other standards are decades old, devised at a time when modern technology was not available.

By using technology and the Internet of Things, the registration and auditing process will not only be cheaper, but also more transparent, says Wild.

The standard is also open source, and Wild encourages others to use it as the basis for other applications. “We only have one rule: once you’ve built the app, communities in remote rural locations must get access to that app at a cost they can afford,” he says.

Food & Trees for Africa (FTFA) is a leading Section 21 Non-Profit Organisation that addresses food security, environmental sustainability, and greening. Its ethos is one of efficiency, transparency, and accountability. It runs its non-profit like a business and continues to innovate in the space. This approach has led to FTFA being recognised as one of the best social development organisations on the continent. With more than 30 years’ experience, FTFA understands what it takes to achieve real, long-term sustainability and make a positive difference to the lives of all South Africans.

What is Promethium Carbon?

Promethium Carbon is a climate change and carbon advisor, founded in the late 1990’s. It began as a finance consulting company, shifting towards environmental finance in 2003 with a great focus on carbon financing. Through the development of methodologies, Promethium Carbon contributed to the establishment of a global carbon market, focusing on carbon and climate change projects. Promethium Carbon is one of the founding members of the South African Clean Development Mechanism Industry Association, a consultancy partner of the Carbon Disclosure Project and is part of the Technical Committee TC207 for the South African Bureau of Standard on the ISO series of Greenhouse Gas related standards. It’s team consisting of strong technical experts in the climate and carbon field assist organisations in gaining a competitive advantage in the global low-carbon economy.